A strong team at the top.

/ / Comments Off on A strong team at the top.
Please spread the word...

Although the Business Manager is the primary officer of an IBEW Local, the President also plays a very important role. Accordingly, it’s vital to have a President that’s committed to the membership, one who will work hand-in-hand with the Business Manager in order to achieve our Local’s goals of improving the lives of our members and their families. Without that close working relationship, the membership will suffer. 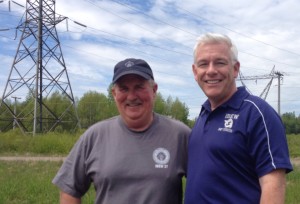 Luckily for us, we’ve had an excellent President in Steve Hayes. Many of you know his absolute commitment to safety, a commitment that he’s demonstrated time and again in his fight to create a working environment where all Local 37 members can go home safely at the end of the work day. Most recently, he took a major role in our discussions to create a renewed safety commitment document with NB Power, while also taking on the role of co-chair for the national IBEW Canadian Utility Safety committee. 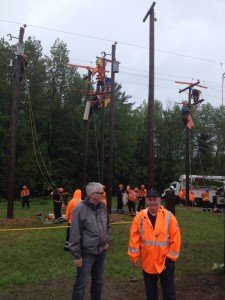 Ross and Steve at the 2014 Lineman’s Rodeo

But what some of you may not know, is the work he’s done for Local 37 above-and-beyond his responsibilities as President. Among the many things he’s done related to safety, he’s also been a champion of learning and skill building,  being a strong voice for the apprenticeship system and also on the organizing committee of the Lineman’s Rodeo. He also played an instrumental and very active role in the organizing campaign that saw 200 new members join us in 2012.  And then last year, after Assistant Business Manager Claude Richard was severely injured in a motor vehicle accident, he stepped up and started working part-time at the union office so that we could continue providing a high level of service to our members, even though we had a key person out on long term sick leave.

As we approach the counting of ballots for Local 37 union officers, I encourage you first and foremost to vote, so that you will have your say in our democratic process.

And then I encourage you to vote for Steve Hayes to continue as our President. He’s a key part of the Local 37 team, and a union brother who has been very effective in representing the members of Local 37, one that has proven his selfless dedication to our members time and again.

How to get results.

Theme by Anders Noren — Up ↑